Once again a choir of girls from the Perins school music department started the Giles Group Christmas party off with some lovely songs, including some that brought the older members up to date! Particularly impressed with one song, one of our members was pleased to believe that it was composed by Verdi, as she liked his music and operas. The actual composer was Birdy, from the New Forest, not Italy! Nevertheless they were all delighted with the singing, and we are delighted that Mr Ashford and the Perins girls took the time to entertain us so well

The interface between generations went fairly well, particularly with the arrival of last year’s music teacher, now Mrs Ashford, with her new baby boy, Jack. The girls were obviously delighted to see her, and to meet Jack, as were the rest of the audience.

The choir made a great opening to the party, which followed on with a quiz, and a reading of some Pam Ayres poems: this on top of the mulled wine and party food meant several ladies needed taking home early, a bit dizzy!

Some photos from the event: 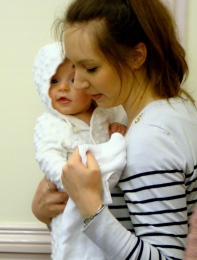 The October meeting was delighted to welcome Gareth Rees, who spoke to us about his work as a Pilot for the liners and container carriers arriving and departing from Southampton, down the Solent. The climb up the rope ladder dropped down the side of the ship or tanker attracted most attention, particularly as often this is used when both the ship and the pilot boat are still cruising along!

Following his slide show and presentation, Gareth also demonstrated the life jacket he wears to climb this ladder, which automatically inflates when immersed in water: not something that one pilot’s wife understood, when she decided that it could do with a clean, and put it in the washing machine!

After the talk, and raffle, various of the Giles Group’s stock of disability aids and fluorescent jackets were offered to Giles Group members, in return for a small donation.

The Giles Group December meeting is usually our Christmas party. This year we were lucky enough to have some of the Perins schoolgirls singing for us, accompanied by Miss Cotton, their music teacher. The girls did not just sing carols, but added other songs, such as “Thankyou for the Music” from Abba, and some classic Christmas songs. 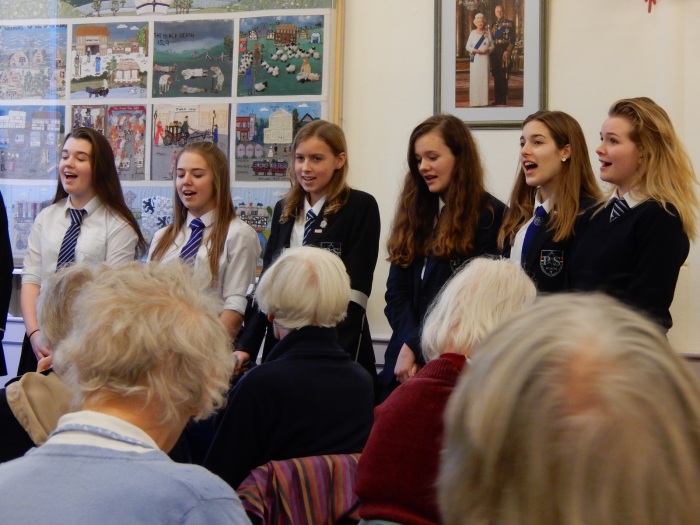 The group call themselves Acapella, (if we have spelled it correctly) which seems the right sort of name, as “A Capella” (translated from the Italian this means “in the manner of the chapel”) and is used for music from a group singing without instrumental accompaniment, or a piece intended to be performed in this way. It contrasts with ‘cantata’, which is accompanied singing.

We were really grateful for their visit, particularly to Miss Cotton, who was due to be married the following weekend, presumably timed to be at the end of term!

The rest of the party went off as usual, with lots of raffle prizes, and plenty to eat, while the guests puzzled over a quiz that was voted the hardest ever. Pauline Tombs seemed to be in particularly good form, and helped her table get the most correct answers, particularly with identifying the various carols.

Many thanks to all those who provided the cakes, biscuits and food for the party, particularly to Jackie Earthy for the Christmas cake – and to Angela Hartley for the table decorations. Plus thanks as ever to Peter Cutler for driving the Minibus every month.

The Giles November 2016 meeting was a presentation by Jane Varrall, an Alresford resident, and also the daughter-in-law of one of our Giles members. Jane explained her all-absorbing hobby of painting on silk, and how this has developed up to the present day. Undoubtedly a skilled artist, Jane has written several books relating to her silk painting.

Starting from the silk scarves, and a beautiful camisole showing a tropical bird and flowers, Jane showed how her painting had progressed through phases with Egyptian and Turkish patterns, and then how adding quilting added a texture. More recently the paintings have involved adding photos – printed onto specially prepared material – and then stitched onto the silk.

There were other examples on display, for example in a Jane Austen themed set of pictures, and a collection of portraits of Burmese ladies photographed on a recent holiday – then these photos were built into colourful silk pictures. One young lady was presented in her wedding dress, looking particularly attractive in a flower garden – Jane had painted out her groom, who had been standing by her side at the time!  Since then Jane has moved on to using similar printed material appliqué-ed on to the silk, for example with pictures of tulips.

Another holiday had been in New Zealand, and this time Jane did allow a man to appear in one of her pictures! Which is not quite fair, as there were several images of Ian Morton, on one extended (long) picture showing the careful restructuring work that created her garden, when the family moved to Alresford.

The meeting was the best attended of the year, with over 35 Giles Group members crammed into the Community Centre: even the Town Minibus was over-subscribed, and had to make two trips! Many thanks to Jane, whose really interesting talk was much appreciated.

As we come up towards the Christmas party at the December meeting, it is worth looking back to review the last two talks, which have been very different. In September we had David Groeger from the Alresford Chiropractic Clinic at the bottom of West Street, who explained some of the history of his profession. There seemed to have been a few family arguments over how to treat bad backs, but not in his family at least! Once David has put your back, neck or leg back into action, he is a great advocate of using the proper style of walking stick, to keep your head held high. Maybe this should be possible around his practice building now that there are no longer any big holes and mounds of tarmac in the pavement there.

In October we had a very different talk, from Aiden Simons of Ropley, who talked about his experiences while helping several children’s schools in Kenya, which he after when he spent some time in the country monitoring various international development projects. Since then Aiden and his wife have been helping find materials and donations to build schools, and even teaching some of the classes, having become firm friends with the leaders of the local Churches. Aiden was about to depart on another trip before Christmas. The stories he told were very moving, making all appreciate living in a society where such things would not be tolerated, particularly in relation to the teaching of deaf or blind or otherwise disabled children. The members had a collection for Aiden to spend in things needed for the children he was going to visit, which amounted to £70.

For our Christmas party on December 14th, we have part of the Perins school choir coming to sing some Carols, and then will organize a Christmas quiz and raffle. One of the raffle prizes is to be a jar of Galaxy Hot Chocolate powder, which they have kindly donated: the second jar we are using for some hot drinks on the day!

For the Giles Group September meeting we were treated to a talk about the Mary Rose, and an entertaining hour from Trevor Sapey of the Mary Rose Trust, based in Portsmouth Dockyard.

Trevor explained that the Mary Rose was a well travelled ship, having cruised around the UK and Scotland for 34 years, before that fateful day in around 1544. The French fleet was a determined effort to strike a blow against Henry VIII, whose forces had acquired parts of France in an earlier raid in the opposite direction. So the force sent over was stronger than the later Armada sent by Phillip of Spain against Elizabeth. The ships raided the eastern side of the Isle of Wight, and were anchored off Bembridge. The British fleet, smaller than that of the French, sailed out of Southampton water into the middle of the Solent, but in the first action the Mary Rose changed course off Southsea, and with so many extra troops on board, and lower gunports open – with possibly an untrained crew consisting of many Spanish POWs – the ship turned turtle, and sank very fast.

Trevor was dressed in the clothes of a typical sailor of the time, a better than average sailor as he could afford a shirt! The slashes seen in jackets of those days were really to be able to show off the extent and quality of the shirt underneath! He also brought many artefacts modelled on what was found in the Mary Rose excavations, and explained the sometimes gory details about them. The ship was excavated purely by volunteer divers in the 1970s, and raised in the 1980s, after various gifts and external funding was raised. After years of washing and treatment and drying, the side of the ship raised will be seen from Christmas without the air ducts and other preservation pipe-work all round it.

The Portsmouth dockyard visitor centre includes the Mary Rose as one of the attractions included in the day ticket!